“It’s almost like a time warp.  We’ve got a lot of the same crew and same producers [from 1992].  Bottom line, relationships are timeless and so are problems with them… and Miami exudes this sexuality that’s very enticing.”
–actor Steven Eckholdt, Grapevine (both versions)

In 1992, CBS had a mid-season comedy called Grapevine.  Way, way before its time, it honestly would do better now, with a twitter universe and a facebook world.  Unfortunately, as far as building a lasting audience relationship, it’s already struck out.  Twice, in fact.

And yet, I loved it.  Really, I did, though almost nobody else even remembers either version of the show.  It’s like that secret fling that no one else knows you had, way back when.

The premise of this half-hour comedy was a group of three friends talking (gossiping?) about people in their lives and their romantic relationships.  It interspersed quick, one-liner comments from these friends (made directly to the audience) with various scenes of the relationship-in-progress, eliminating the need for some of the boring set-up and exposition.  This made the story about the couple-of-the-week much faster, and much funnier.  Each episode concerned a different couple, making the show really a romantic-comedy anthology, with commentary by the regular cast, set primarily in the sunny resort area of southern Florida. 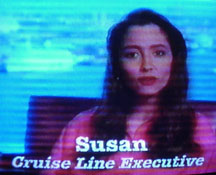 The three friends are Susan, David, and “Thumper”.  Susan (Lynn Clark), who works for a cruise line, is dating restaurant owner David (Jonathan Penner), while “Thumper” (Steven Eckholdt) is a TV sportscaster and David’s dedicatedly single younger brother.  So, between the cruise line, the restaurant, and sports, there are lots of avenues for particular stories to arrive, and the make-up of the regulars insures that we have commentary (and snark) from many points of view, be it male, female, single, committed to a relationship, etc.  And so, we’ve taken 1970’s Love, American Style romance vignettes and moved them into the MTV age.  (And this version would still be ahead of its time today, in my opinion.) 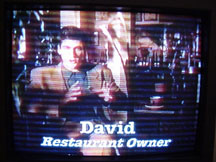 This show’s pace was very fast, with quick cuts and isolated quips, so you really wanted to be paying attention.  It was designed like a music video, bouncing from scene to comment to comment to scene again.  For example, most half-hour comedies have maybe a dozen scenes during their 22-minute running time (after subtracting commercials and credits).  Grapevine had between thirty and thirty-five.  This thing moved!

Doing a show in this manner was unheard of on network television at the time, especially when the show was also filmed entirely on location in South Beach, with a single camera like a theatrical film.  (Most sitcoms are filmed like a play, with multiple cameras for character reactions and such.)  Oh, and no laugh track.  You had to pay attention to figure out where the jokes were.  It was like you’d taken The Real World:  Miami from MTV and made it into a scripted romantic comedy. 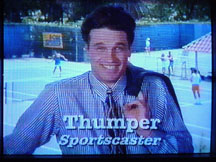 The other thing that Grapevine borrowed from MTV was a rather frank and open emphasis on sexuality, both in the plot twists and in the conversations of the friends.  Most of the episodes dealt rather significantly with not just the relationship of the week, but with the topics of temptation, affairs, the loss of virginity, friends becoming lovers, and other questions concerning intimate personal relations.

“I’m not being coy by saying this, but this show is a romantic comedy about relationships, and it would be naive to say that most relationships, especially passionate relationships, don’t involve a great deal of sex, or thinking about sex.  Since my goal was to tell stories as lifelike as possible, they think and talk as much about sex as people who are caught up in a relationship might.”
–David Frankel, creator and producer

Realize that the show wasn’t on cable, and that the environment of network television at the time wasn’t really as radical as one might think.  The show aired between Murphy Brown and Northern Exposure, and Candice Bergen’s Murphy Brown character received significant criticism from then Vice-President Dan Quayle concerning her becoming a single mother on that show.  If single motherhood was going to get high-profile criticism, imagine the attention infidelity and temptation as regular plot elements would receive, let alone just the relatively free commentary about those subjects, be it humorous or not.

And Grapevine debuted only about a month after Quayle’s remarks.

It also didn’t help that the series was an anthology, with minimal interaction with the regulars (besides the continual commentary, of course).  The practical effect was that the show really lived or died on the basis of how good the guest cast was each week.  In this respect, Grapevine actually lucked out to a degree, as the list of guest actors in the original six episodes looks like a TV casting agent’s dream, although most were still unknowns at the time.  Courtney Thorne-Smith (Melrose Place, According to Jim), Terry Farrell (Star Trek: DS9, Becker), Dean Cain (Lois and Clark-The New Adventures of Superman, Las Vegas), Mariska Hargitay (Law & Order:  Special Victims Unit) and Patrick Warburton (The Tick, Rules of Engagement) all appeared early in their careers in individual episodes. 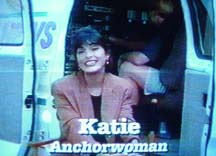 CBS (which had always been relatively conservative, compared to the other networks) was probably not the best place for Grapevine anyway, and so, choosing which battles to fight, the veteran Murphy Brown would continue on, and Grapevine died on the vine, airing only six episodes.

“If it doesn’t work, okay… we did our best.  That’s the only thing you can ever do… work on something that entertains you, and hope there’s enough other people out there to keep it alive.”
–David Frankel

Never count out romance.  Frankel knew the show was ahead of its time in ’92, so he kept pitching a revival to network honchos every year, and finally, in 2000, CBS decided that they were ready to try the relationship again.  Like doing The Real World:  Miami once more, only with a new cast. 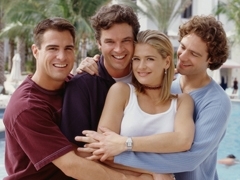 cast of the 2000 Grapevine -- Eads, Eckholdt, Swanson, and Sutcliffe

Lo and behold on CBS’s schedule for January that year was Grapevine, with pretty much the same premise and presentation, but it’s now 8 years later.  TV has become a lot more open about sexuality and the topics it can discuss and make fun of.  Still airing on Mondays, but an hour earlier, the set-up is mostly the same.  There’s one new character, Matt (David Sutcliffe), manager of an upscale South Beach hotel, and newly divorced, for a new perspective.  Just to confuse the issue a bit, though, we’ve got a new Lynn (Kristy Swanson), a new “Thumper” (George Eads), and the previous “Thumper” is now playing older brother David (Steven Eckholdt).  The show is still an anthology, although there is more involvement in the stories from our main characters, and the pace is still quick.

In ’92, there were local CBS stations that had refused to run Grapevine, citing the racy content, and some companies had deliberately avoided advertising on the show.  But, it’s now 2000, a new century, with the biggest hit on television being  HBO’s Sex and the City, and there’s much more openness on the topic of sex.

The anthology aspect was still there as well, although the continuing characters were a bit more involved in each story.  But it still really lived or died on the relationship-of-the-week.

“It was very important for me to do an anthology show where the guest characters are the stars, and each story had a beginning, a middle, and an end.  That way, people can behave as they do in life.  They make mistakes.  They do bad things to other people.  Sometimes the people who do bad things are not punished, sometimes the people who make mistakes are not redeemed.  That’s the nice thing about an anthology:  Since the characters aren’t coming back, they don’t have to be saved each week.”
–David Frankel

Unfortunately, the show couldn’t be saved either.  While the TV world got sexier, Grapevine got a bit tamer in comparison to the world around it.  Almost like trying to go back to the beginning of a relationship, but the people have changed, and the things that worked before aren’t quite the same now.  And so, despite getting an extremely rare second chance, Grapevine again ended after only six episodes.

Theoretically, the spiritual descendant of Grapevine (and its granddaddy, Love, American Style), is a new show called Love Bites that will be airing on NBC in the fall of 2010.  It’s described as an hour-long romantic anthology, with two continuing characters and the relationships that surround them, and their efforts to help those romantically challenged souls find each other.

I’ve seen clips of Love Bites.  And… yuck.  Just, yuck.  Honestly… are you sure we can’t get Grapevine back again instead?

LYNN CLARK (1992 Susan) was best known as a soap opera actress, appearing on both Santa Barbara and Days of Our Lives in for multiple years.  After guesting on Seinfeld and Friends, she did come back for a guest shot on the 2000 revival of Grapevine for one episode, playing Matt’s sister.

JONATHAN PENNER (1992 David) was a regular in both Rude Awakening and The Naked Truth, and can still be seen in guest roles on shows like CSI and the upcoming The Colony.  He also appeared in the pilot for the 2000 Grapevine in another role (the producer of Grapevine, David Frankel, is loyal to a fault).

STEVEN ECKHOLDT (1992 Thumper, 2000 David) is the king of recurring roles, playing in multiple episodes of shows like Providence, Friends, The West Wing, and The L Word.  He was most recently seen guesting on the police drama Southland.

After starring in the series Nightingales, KRISTY SWANSON (2000 Susan) was the original Buffy, the Vampire Slayer in the 1992 movie version.  She was also a regular on Early Edition, and appeared in episodes of 3Way and The Closer.

GEORGE EADS (2000 Thumper) went from romantic relationships to forensic science, playing Nick Stokes for the past 11 seasons on the original CSI.

DAVID SUTCLIFFE (2000 Matt) became an actor after a back injury forced him to quit his college basketball team.  He appeared on multiple episodes of The Division as well as I’m With Her, Gilmore Girls, and Private Practice. 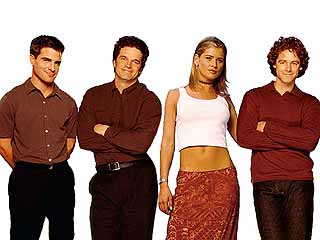 Grapevine resources almost don’t exist, as quickly as both versions of the show came and went. The show isn’t on DVD, and the only good information is from Stefan’s Grapevine site, with a few pics snapped from a TV but lots of episode info (and I wish to credit Stefan for the picture of “Thumper” above).

This is how desperate I am to show you SOMETHING of Grapevine, just to prove it actually existed:  Here is a commercial break from Spring 1992, and you have to wait until the 2:00 mark for the actual :30 CBS promo.  The final three people shown in the commercial are the original David, Susan, and “Thumper”.  At least it shows you something of the style of the show, and the scene/comment/breaking the fourth wall dynamic.

“Okay, [Grapevine] is also a show about young, attractive people who have a lot of relationships and… a lot of sex.  But there’s an anti-cynicism.  They are all deep-down romantics at heart… looking to find that right person.”
–David Frankel

Like lost loves, shows come and go.  Some return to us.  Because when it concerns love, what else is as eternal, as joyous, and as just plain wonderful as a love found once more?  And who knows… maybe, in another 10 years, there will be another Grapevine.  Don’t bet against it, because television loves second chances (and even thirds), and one of the best things to discover is the return of a lost love.

Comments and suggestions, as always, are appreciated.